To Publish or To Self-Publish - Is that the Question?

Let me say upfront: the greatest moment I've experienced as an author was holding my novel, Mira Falling in my hands for the first time. There was something astonishing - like a brilliant magic trick - about seeing the book and feeling it as a tangible object. After two years of work, labouring over a dream, here was the evidence: I had made it. I was a real writer!  But what does that mean – a ‘real’ writer?

For me, being a real writer meant someone who had a novel published by a publishing company which, by extension, meant a ‘real’ book was one that was on a bookshop or library shelf. There is a simple explanation for this perception: history. For as long as there has been ‘the novel’, there has been a publisher, who took the raw work of the writer and transformed it into an accepted form (the book), which was then delivered to the reader. This is how all of the great novels were brought into the world and how writers like Dickens, Shelley and Hemingway, for example, became household names — and who can argue with such a prodigious history? So, when it came to having my own work published, I understood implicitly that I had to have a publisher, who would provide my works with three things:


Needless to say, I didn't even consider self-publishing with the ‘vanity press’, nor did I look to smaller boutique publishing companies because that wasn't where ‘real’ writers were published.

Was my understanding wrong? No. Books published by long-established publishing houses do have the ring of authenticity about them, and writers who are accepted by these companies do carry the aura of being ‘real’ authors. At the same time, and in the digital age, it’s a limited view.

What, then, would make a dye-in-the-wool traditionalist self-publish a novel?Simply put, the encouragement of a friend who has self-published her work, having a publication-ready novel gathering dust on my laptop, and the ease of the process.

Hearing success stories is always motivating because they create a sense of ‘I can too.’ After finishing our long chat over coffee – where I grilled my friend mercilessly! – I went home and began my own research. This was pretty daunting as there was so much information, but after a couple of days of reading through articles, blogs, forums and how-to guides, I had enough knowledge to get the process underway. These are some of the pages I found helpful:


The second motivation to self-publish was having a novel that had been edited (repeatedly by myself and others) and polished, but which was inevitably returned to me by traditional publishers with a note that said something like:

‘…While we thought the story was extremely well written, with engaging characters and a narrative that cleverly builds suspense, I'm afraid that in the end we felt this wasn't quite right for our children's list.’

Was it the evil nuns in Sisterhood? :D Maybe, but the end result was the same: I had a novel that publishers couldn’t find a home for and a story that, if I accepted their position, would never find a reader – unless I took control.

Now, like most people, I lead a busy life and taking on anything new and onerous always makes me pause. Happily, the self-publishing path has been smoothed by those who have gone before me. Yes, it took time and required effort but not an unreasonable amount, and the companies I chose to publish through provided plenty of support and guidance. (The only aspect that was truly horrible was reading through the IRS instruction booklets *grrr*). For me, there was also a financial outlay as I chose to have the text of my novel formatted and the cover designed by Ebook Launch. I made this decision because, in the time=money equation, it was cheaper to have someone else do this work for me. For others, who have the time and extra skills in design, these costs may not be a factor. Okay, so from the initial conversation with my friend to the day Sisterhood was published as an ebook was a little under a month, which is not too bad considering it took upwards of seven months for Mira Falling to hit the bookshelf after I signed my contract with the publisher. I'm sure future work will go up more quickly now that I know the process.

I have to say I’m very happy that Sisterhood is out there for readers to find but, to be honest, I’m also not over my craving for traditional publishing. I will always send new work to a publishing company first, mostly because I am a child of the era when 'real’ books were tangible artefacts that were kept on a ‘real’ bookshelf. However, if a publishing company declines to publish my work, then I will go directly to the reader, and I don’t see any reason why the two avenues can’t be pursued, or why one should make me more of a ‘real’ writer than the other.

To celebrate the publication of my first ebook - Sisterhood - I've put together a new website. Go to mariaarena.com.au to find information about my work and keep up with when new works will be available.

You'll find Sisterhood available on the following websites, where you can read the first three chapters for free and purchase a copy: 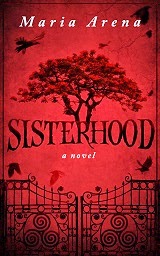 Maria
Posted by Maria Arena at 21:58 No comments: